FOR CHINESE ATHLETES TO STRIVE FOR THE BEST

(Hong Kong, 29 June 2016) ANTA Sports Products Limitedunveiled the Champion Dragon Outfit for the Chinese Sports Delegation (CSD) at the 2016 Rio Olympic Games tonight. As a partner of the Chinese Olympic Committee (COC), ANTA Sports has designed the Champion Dragon Outfit (the “winning outfit” which will be worn by Chinese athletes at the Olympic Games award ceremonies in Rio if they win Olympic medals). The outfit was unveiled at the Water Cube and modeled by 22 models and several former Olympic champions. The presentation showcased the ability of ANTA Sports to design an outfit that strongly resonates with the Chinese people’s passion for the Olympic Games. ANTA Sports also launched the Olympic competition outfits for ten national teams: gymnastics, trampolining, weightlifting, wrestling, judo, boxing, taekwondo, rowing, canoeing and water polo. Together with its Olympic message, “Go Surprise Yourself”, the company hopes the winning outfit will inspire the national team to show China’s prowess to the world at the Rio Olympics in August.

ANTA Sports has been a partner of COC since 2009 providing winning outfits for Chinese athletes in over 30 international games, including the Vancouver Winter Olympics, London Olympics and Sochi Winter Olympics. These outfits have consistently exhibited the spirit of the Chinese sporting industry, forming an integral part of the golden age in China’s Olympic history along with the Chinese athletes. For previous events, ANTA Sports developed a range of different themes for the winning outfit, including a Chinese knot for the Vancouver Winter Olympics, an Olympic flame for the Guangzhou Asian Games, a champion dragon for the London Olympics and a theme of the beauty of China for the Sochi Winter Olympics. Dedicated to providing the highest quality and most attractive winning outfits for Chinese athletes when they step onto the podium, ANTA Sports has played a key role in some of the greatest moments in Chinese sporting history.

Well-known fashion designer Masha Ma was invited to help create the Champion Dragon Outfit as a design consultant. With her support, ANTA Sports created an outfit that perfectly combines Chinese tradition and modern fashion aesthetics to support the Chinese athletes at the Rio Olympic Games.

The core concept of the outfit reflects the spirit of the dragon, a traditional totem of Chinese society. It uses modern neon light effects combined with paper-cut art to create the illusion of a dragon’s shadow. The body of the dragon runs in motion with the outfit, representing an unstoppable force that inspires Olympic athletes to forge ahead and to reach their sporting potential. The reflective effect of the dragon’s shadow represents the idea that the dragon is shining over Rio, sending the Chinese people’s best wishes to the athletes as they reach for Olympic glory. The torso area of the outfit is lined with reflective silver fabric, highlighting the word “zhong” meaning “center”, which conveys the idea that the burning heart of China will never change. There are also traditional Chinese characters printed on the back with the Chinese flag’s five stars, expressing strong energy and a rich sense of retro fashion.

To create a comfortable yet stylish outfit for the athletes, ANTA Sports has spent many years tracking the performance of athletes to develop a design that does not lose its shape when worn. The outfit is slim and straight with a stretchable fabric in the arms, maximising comfort by giving athletes as much flexibility as possible.

Cutting edge technology with virtual reality experience at the Olympics

ANTA Sports’s Olympic slogan “Go Surprise Yourself” not only sends the company’s best wishes to the new generation of Chinese athletes, but also encourages the Companyto push its own boundaries and to continuously innovate. ANTA Sports worked with Samsung to create a brand new virtual reality (VR) experience through the Samsung Galaxy S7 edge smartphone and Samsung Gear VR trial version during the ceremony. Every attendee had the chance to enjoy a unique visual experience, making them feel like they were at the Rio Olympic Stadium at the same time as they were watching the launch of theChampion Dragon Outfit, and the use of mobile technology gave everyone a distinctive Olympic experience.

In addition, the Olympic Champion Outfit for the Rio Olympic Games showcases the most advanced clothing technology. The innovative design allows for a good amount of adhesive force between the surface and inner fabrics, allowing excellent permeability. The surface fabric is breathable and waterproof, and the whole outfit is easy to clean. The inner lining has also undergone a xylitol cooling process, which will allow athletes to feel refreshed even under the hot weather in Rio.

The material of the outfit was provided by DuPont™ biotechnology, which develops polyester fibers from environmentally-friendly sources. The warp is made using recycled fibers created from the reproduction of soft drink bottles; whereas the weft is made using corn that undergoes biotechnological transformation to become the Sorona® fibre. The entire production process of the fabric is environmentally-friendly; for example, it uses recycled water that is produced from an energy-saving staining technique and resin which is free of fluorine and solvents. 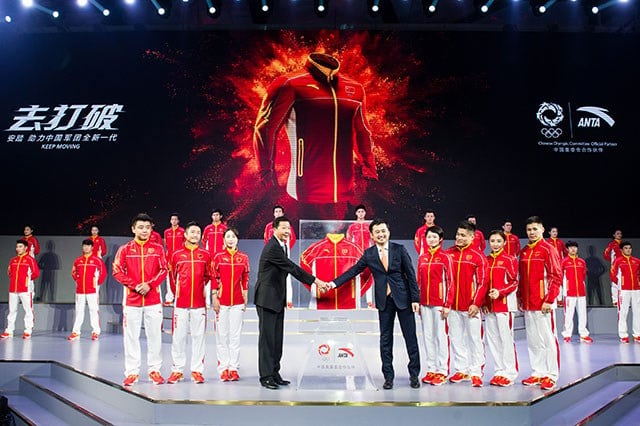